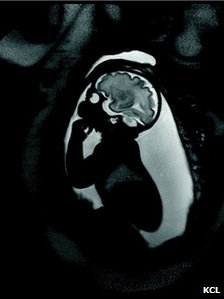 “UK scientists have embarked on a six-year project to map how nerve connections develop in babies’ brains while still in the womb and after birth. By the time a baby takes its first breath many of the key pathways between nerves have already been made. And some of these will help determine how a baby thinks or sees the world, and may have a role to play in the development of conditions such as autism, scientists say.

But how this rich neural network assembles in the baby before birth is relatively unchartered territory.

Researchers from Guy’s and St Thomas’ Hospital, King’s College London, Imperial College and Oxford University aim to produce a dynamic wiring diagram of how the brain grows, at a level of detail that they say has been impossible until now…”