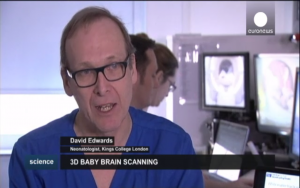 Thanks to state-of-the-art technology, doctors at King’s College London are mapping the brains of babies while they are still in the womb.

Traditional MRI scanners work by taking a series of cross-sectional images that are then are reconstructed into 3D images. Conventionally, subjects entering an MRI scanner must remain as still as possible and are often held in place to make sure the scans are clear.  This is obviously impossible with foetuses, which float in the womb and are therefore in continual movement. Until recently, the only way to scan a foetus was to use single shot techniques to “freeze” motion.  However, new software is enabling doctors to take scans during movement, making it possible, for the first time, to see individual nerve connections forming in the baby’s brain and draw up a map, which scientists are calling the Connectome.

The research is being led by Professor David Edwards, consultant neonatologist and professor of Paediatrics at King’s College.

“The Connectome will provide a map so that we can understand what’s going on in the brain and provide a context for all the other information we have. At the moment we know a lot about how the brain works, we know a lot about the molecules in the brain, how the messages are sent from one nerve fibre to another, but it’s very difficult to put that in context because we don’t have a map in which to place all that information, and even more, for our case, we don’t have a map that changes over time. So what we will have is a four-dimensional map – three spacial dimensions and one dimension of time – in which we can place new information, or indeed old information that we already know about the brain to understand how things work in context,” says Professor Edwards.